In 2021, we had two wonderful cats come through our shelter doors. Shadow and Londi were both extremely sweet cats, that had contracted FeLV sometime in their life. This meant that although they were friendly with other cats, we could not keep them in a traditional colony due to the risk of this virus spreading to other cats. Cats that stay in the shelter with FeLV have to have their own space. Both of these cats were unique in their own ways, and made an impact on people while they were in the shelter. They would continue on to make an impact after being adopted as well.

We often times see cats that come in with Feline Leukemia Virus (FeLV), which can be transmitted from infected cats when saliva is involved. This virus can leave cats more susceptible to other infections and diseases, that can sometimes be fatal. For this reason, cats with FeLV can only be adopted with other cats that have the same virus.

Shadow came to us in April of 2021. We knew that because of her sweet demeanor, someone would fall in love with her once they met her, and they did! She had a month long stay at the shelter before finding her perfect match. We were glad to see her off to a new home where she could be showered in love and affection.

“When she was here in the shelter, Shadow was just the sweetest girl. She LOVED people and while she could be shy at first, would curl into your lap if you gave her the chance. After being overlooked for a month because of the FeLV (despite her best efforts of charming every single person that came near her)  Candace finally saw her for who she truly is: A devoted and loving companion just waiting for someone to give her a chance. It warms my heart to see this girl being loved and pampered like she deserves.”  – Morgan, Cat Care Supervisor. 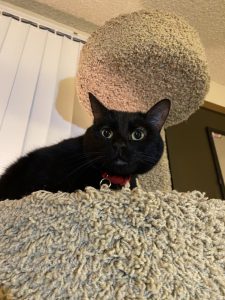 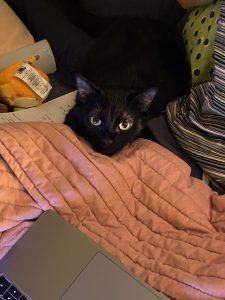 Londi, who also came to us FeLV positive, had a different shelter experience. He came to us as a stray and for that reason, we did not know a lot about his background. Due to him having FeLV and being longer term, we made him an office cat so he would have more room to roam. Londi was outgoing and not afraid to strut his stuff, but also had a huge heart.

Although our staff started to fall head over heels for Londi, some people that came to visit him were concerned about his medical needs. Londi’s spunky personality shined, but he was overlooked time and time again. After about two months of waiting in the shelter, he finally got his chance at his forever home. 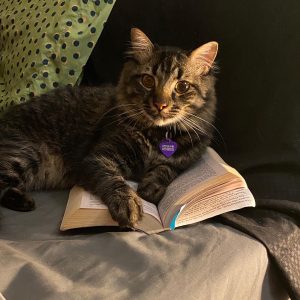 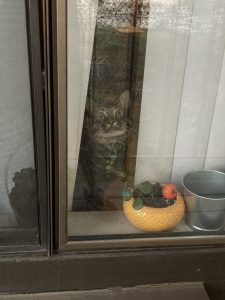 “I regularly think about Londi and look at his picture on my desk. Londi was the most entertaining office cat that would love to play, and then the sweetest cat that would wrap his arms around you and give the longest hugs. Luckily we get regular updates from his family with lots of pictures that show how spoiled he and his sister that was also adopted from here are.” – Staci Sanchez, Executive Assistant.

The Start to Forever 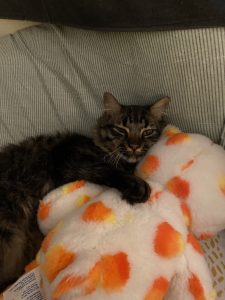 She shared that in his new home Londi enjoys poking his head through the blinds and looking out the window. He loves his sushi shaped toys that they bought him and feels like the two of them really connected. As soon as he got home, he fit right in and felt like he had been there for a long time.

“He is doing extremely well here with Shadow and they are both thriving! He loves to play, nap, snuggle, and eat. He loves getting to sleep on the big, full sized bed every night. Honestly, he is extremely spoiled here because I just absolutely adore him! Adopting him was the best choice I ever made. Truly, he is my animal soulmate.” – Candance, Shadow and Londi’s Adopter.

The two of them quickly adjusted to being around one another, and share things that they love such as the cat tree they sit in. As soon as they were past their introductory period, they started to play together as well. 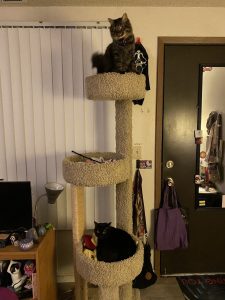 “They both love to play so much, which they do all the time. Shadow favors the toys she got from the Humane Society more than anything else we give her! She couldn’t live without her little turtle toy and her little wine bottle toy. She also loves the cat tree that her little brother, Londi, brought with him from the Humane Society. No matter the time of day, you can find at least one kitty snoozing in the top tier and snuggling with a toy.” – Candance, Shadow and Londi’s Adopter.
Besides playing and sleeping, one of their other favorite pass times is eating. They know when its time to eat and are on a schedule for breakfast in the morning. Candance said that she has a hard time sleeping in, because they wake her with a “symphony of meows!”
“Shadow and Londi have improved my life tremendously in too many ways to count. I’ve never felt so connected to two cats before and can’t even remember what life was like without them. They fit so perfectly in with my routine and we have such a beautiful family together! Overall, they’ve just been absolutely perfect in my home. I hope one day to introduce a new FELV+ sibling from the Humane Society when we move into a bigger place. These cats are so special to me and I wouldn’t trade the time I’ve had with them for anything else in the world.” – Candance, Shadow and Londi’s Adopter.
Shadow and Londi landed a wonderful family, and although they started out being overlooked, their situation couldn’t have worked out better for the two of them ending up together. If you are interested in adding a furry family member to your home, visit our Carson City or Reno Adoption pages.
: Happy Tails
Menu
X