Rooting for an Underdog

We found a happy home for our featured #Underdog Asher at the Make a Dog’s Day Event at Michael Hohl Subaru on October 22, 2022!

This sweet five-month-old puppy came from a seriously neglectful situation and was suffering from fleas and other challenging skin conditions.

Our veterinary team was fantastic in providing excellent care to make sure that Asher healed quickly from his skin issues. From medicated baths to antibiotic therapy, Asher was in our custody for over a month. During his recovery, so many staff members here at the shelter quickly fell in love with this incredibly brave and adorable little guy! 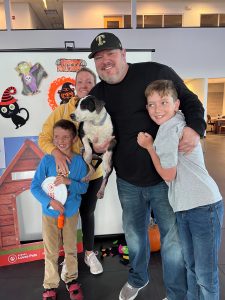 Once Asher began to recover and show signs of being ready to be adopted into a loving home, our team quickly decided that he was the perfect mascot for our event with the team at Michael Hohl Subaru in Carson City -as he’s the ultimate ‘Underdog” and so deserving of a second chance at a loving home! So many people were ready to make this pup their furrever friend! He ended up getting adopted by a wonderful family. The Harris family ended up making the trip to the capital city and instantly falling in love with the dog. Their two sons, Austin and Owen were so excited to see Asher in person after watching him on the news.

“We watched him on the news and wanted to help him because he looked sad, and we wanted to show him what it’s like to be part of a family that loves him.” -Austin, 10 years old.

“My brother Austin and I spent the whole night watching dog training videos on YouTube so we have a lot of tricks we’re ready to teach him.” – Owen, 8 years old 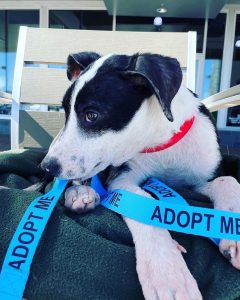 We are so happy for Asher and his new family. His Halloween costume, according to Austin and Owen, was a ninja.